Windsor History Museum features historic buildings from around Windsor built between 1882 and the 1920s. Each building helps tell the story of Windsor’s beginning with the completion of the Greeley, Salt Lake and Pacific Railroad through the sugar beet boom of the early 20th century.

The Train Depot includes many exhibits and hands-on activities for all ages and is a great place to start your museum experience.

Admission to Windsor History Museum is free, but donations are always appreciated! 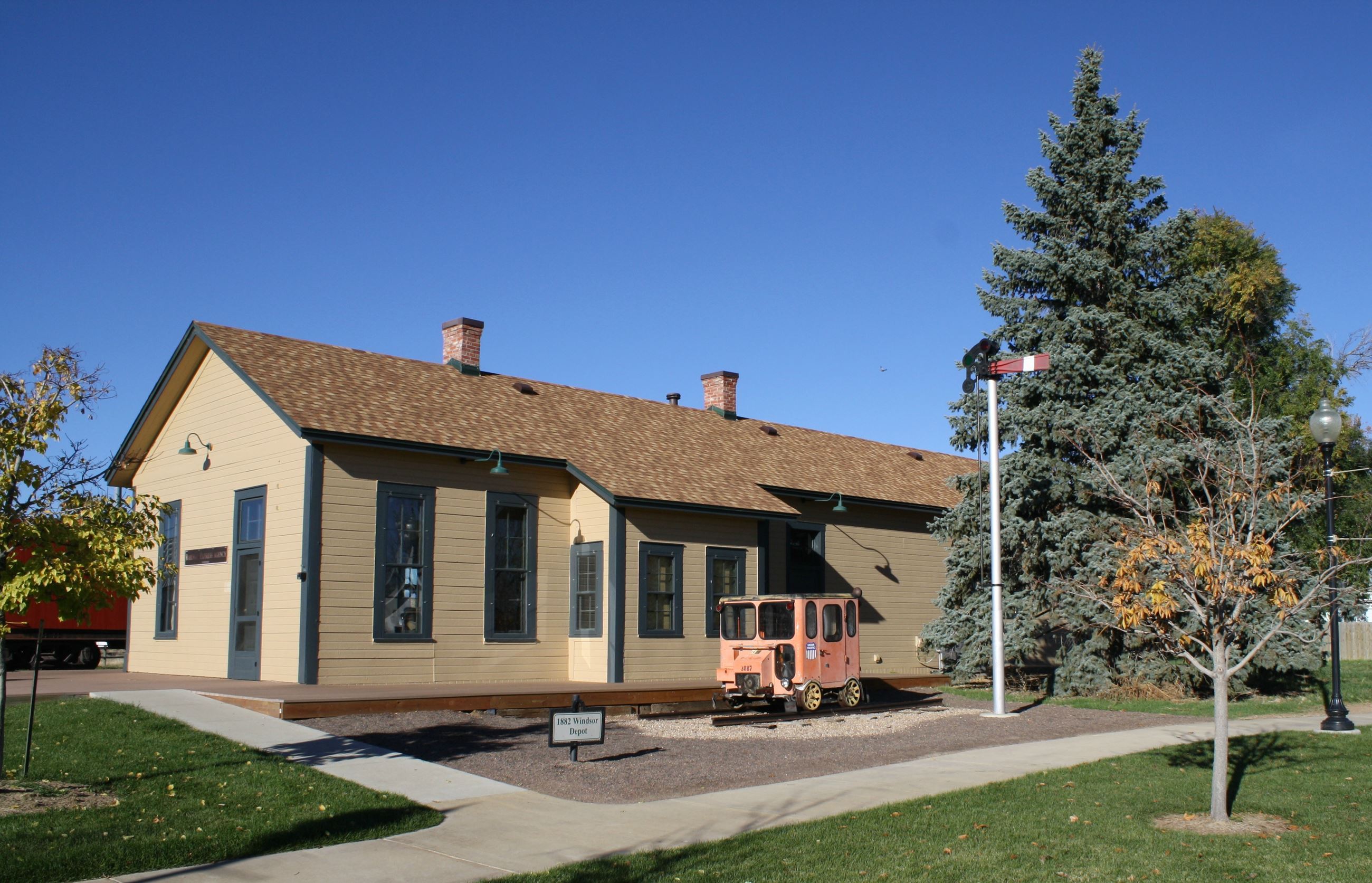 The Depot served as the town’s communication, commerce, and passenger center. Strategically located halfway between Greeley and Fort Collins, the depot connected Windsor with the larger region. Originally built by the Greeley, Salt Lake, and Pacific Railroad (which would later become the Colorado and Southern Railroad), the depot was opened in 1882 as a combination depot for both freight and passengers. In the late 1890s, the Depot was remodeled to accommodate the living quarters for the station agent and his family.

The depot remained in service until the early 1970s when the Colorado and Southern Railroad decided to replace it with a new depot. Windsor locals worked with the town and railroad to save the original depot and were able to relocate it to its present location at Boardwalk Park in 1975. The building was restored in 1976 and became the Windsor Depot Centennial Museum (it opened in Colorado’s bicentennial year). 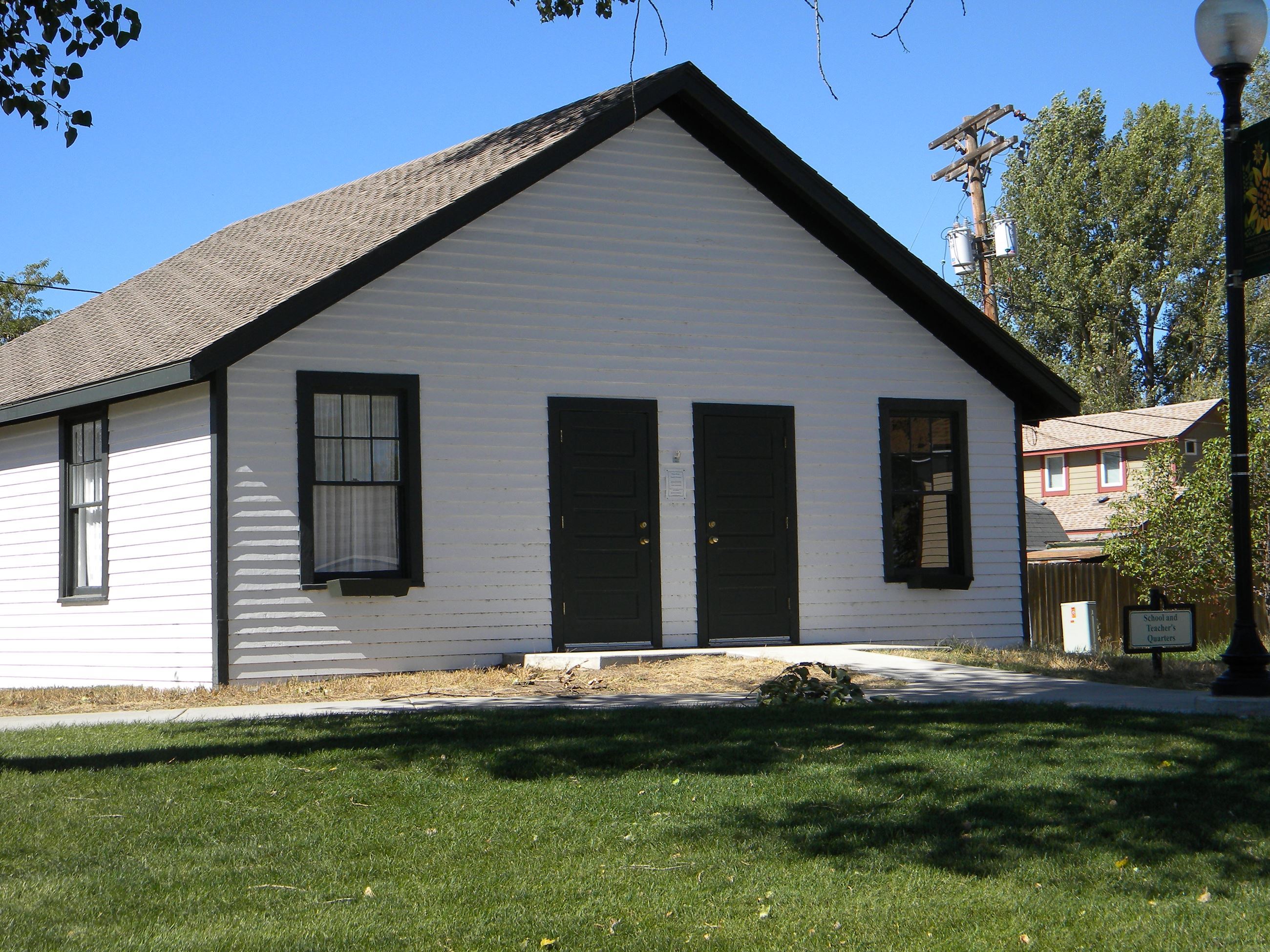 This schoolhouse was one of many found throughout rural Colorado, and it accommodated first through eighth grade as well as the teacher’s residence. The building was enlarged through the years and divided into two rooms; the schoolroom was on the right, and the left side was used as living quarters for the teacher. The schoolhouse was dedicated at Boardwalk Park on July 13, 1993.

When the Windsor-Severance Historical Society restored the schoolhouse, they made the decision to divide the building into a school room and a teacher's quarters to demonstrate the simple living situations of many rural schoolteachers. While some schools did provide living quarters for teachers, they also often had to live with the families of students. 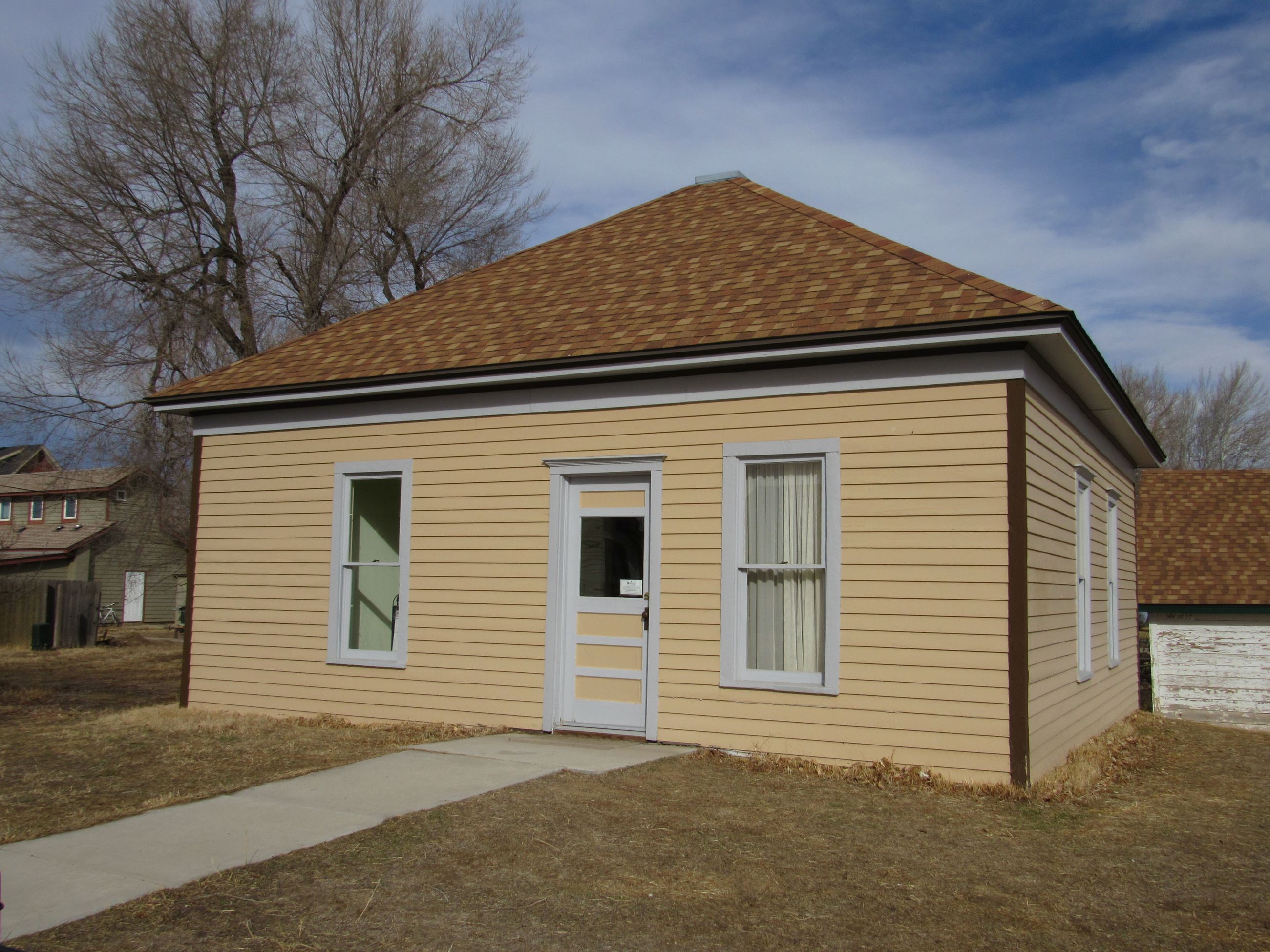 This structure represented an increased standard of living for German Russians living in Windsor. A four-square was usually square with simple, vernacular architecture, and was larger and more comfortable than sugar beet shanties. This Volga German house is a typical early German Russian construction; a square divided into four main rooms. The land the house was originally on was owned by the Great Western Sugar Company and was used for raising beet seed.  In 2005 the structure was relocated to Boardwalk Park and restoration began in 2012. The North face of the building was originally the front. 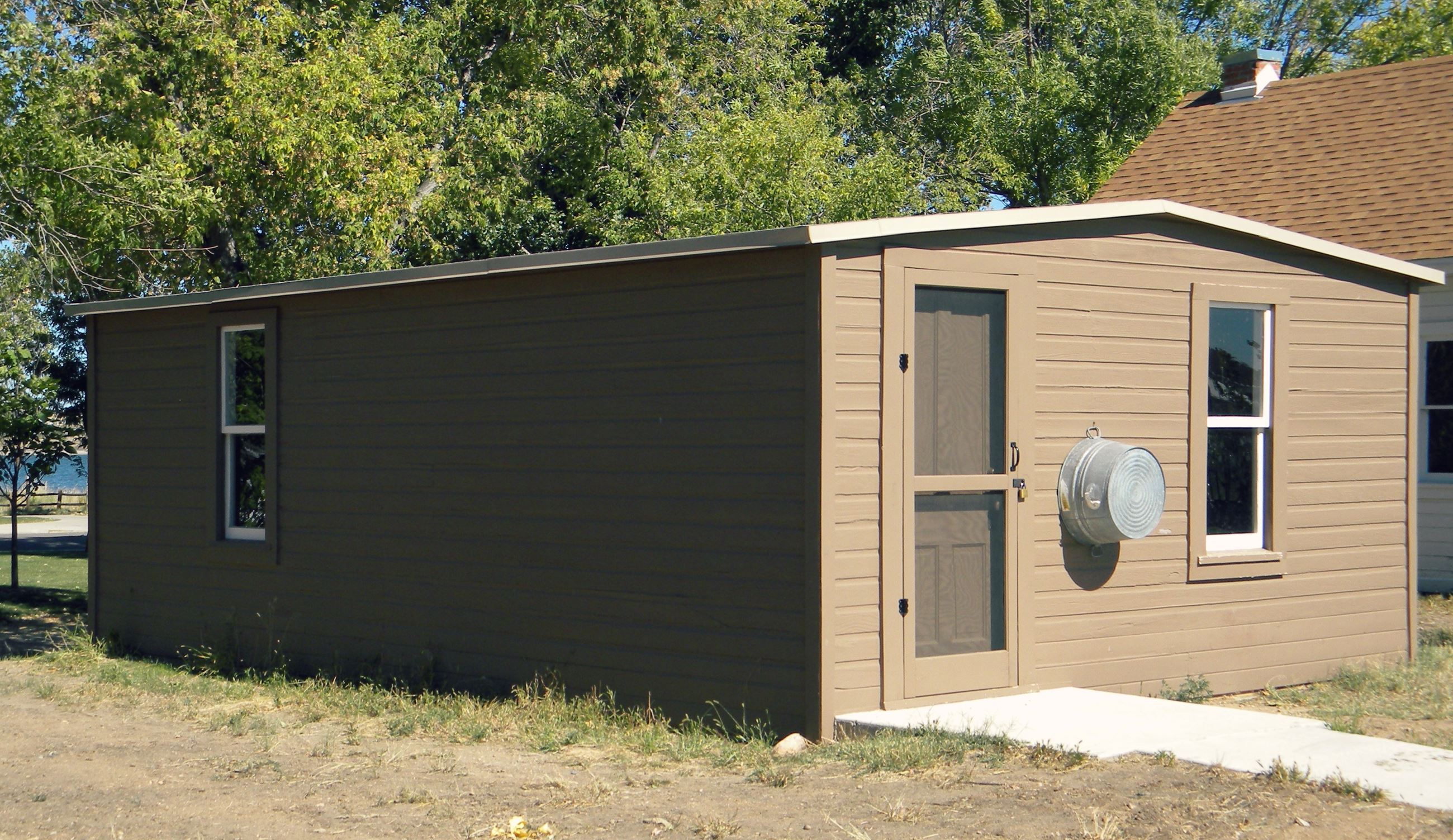 The shanty served as temporary housing for sugar beet laborers and their families.  The construction of the sugar factory in 1903 encouraged officials from the Great Western Sugar Company to help local farmers recruit field workers.  Drawn from diverse ethnic communities, these families were essential to the success of the sugar beet industry in Windsor. Recruits were often provided with temporary housing near the fields. Colorado farmers commonly hired Germans from Russia, Mexicans, and Japanese.  In Windsor, the Germans Russians were the most populous group, with the Company drawing from those already settled in Nebraska and Kansas and eventually from those still residing in Russia. 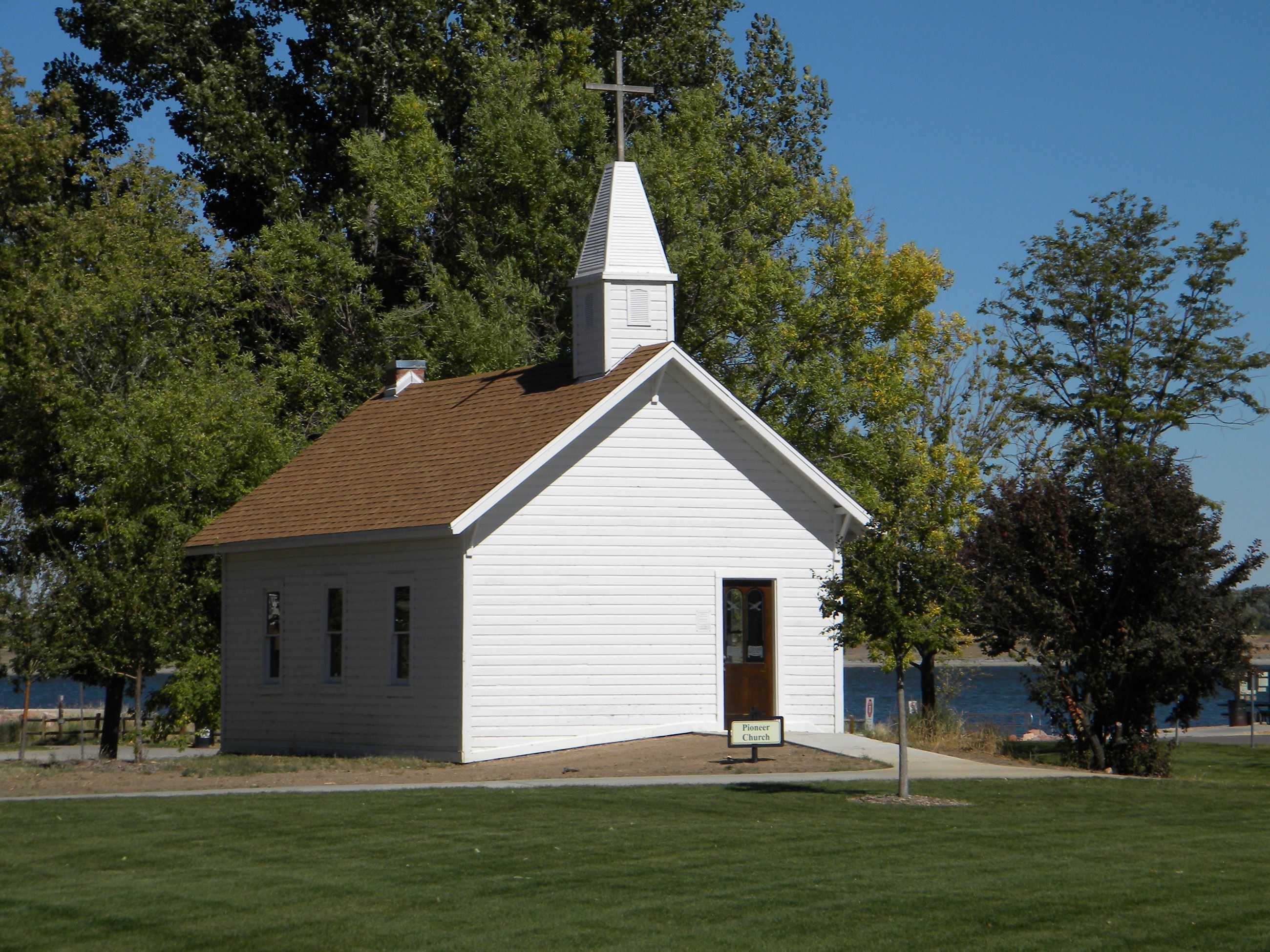 Established by German from Russia immigrants to Windsor, the chapel, originally referred to as the Prayer Meeting House, was used for both religious services and as an important community center. Prayer groups would meet several times a week to share hymns, scripture, personal testimonies, and prayers. For German from Russia families, the Prayer Meeting House was more than a place for religious worship.  It fostered a sense of community by serving a diverse group of people and   activities.  Although Germans from Russia were united by language and heritage, they were religiously diverse. The various denominations in Windsor, like in many small  communities at the turn of the 20th century, could not afford their own churches and so shared a Prayer Meeting House which provided a gathering place for simple worship that could encompass many faiths.

Eventually the building was moved west of town to the Jacoby farm and used by the Windsor Wranglers Riding Club as a clubhouse for a number of years. Members of the Windsor-Severance Historical Society received permission from the Jacoby family to move the building to Boardwalk Park in 1990, where it was first interpreted as a non-denominational Christian Church instead of a prayer meeting house. It was dedicated on July 21, 1991, and the current steeple was added in 1998.

Sign up for MuseNews to stay up to date on upcoming programs, exhibitions, and events!